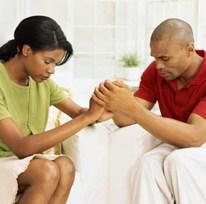 This can be a very controversial subject for many, I must approach this from God's point of view.

Have you ever sneaked a look ahead of time at a gift you were going to receive (e.g. finding a birthing present and looking at it before your birthday)?  Did knowing ahead of time spoil the surprise on the day you were to receive it?  Living together is like opening a wonderful gift ahead of its intended time.  It is unwrapping a special gift, peeking at it to soon, and then having to live with the consequences.

​The Bible says in Hebrews 13:4, "Marriage should be honored by all, and marriage bed be kept pure, for God will judge the adulterer and all the sexually immoral."  God has so much more in store for the couple who will stay pure in their earthly relationships.

​Cohabitation rates have skyrocketed since the 1950s, but also during this period we have seen a correlating upsurge in divorce.  In chapter 8 of "The Marriage Journey", available at the book store, we have gone into detail on how cohabitation impacts your marriage flight plan.

​ When it comes to living together before marriage, you may think you are fine just because you are "living together" and nothing more, but I would suggest that you are not.  In the midst of living together, you are also opening the door to even more temptation between you two, and hurting any testimony you may have of following Christ as you proclaim that it is a God glorifying thing to live together before marriage.  You are also in danger of leading others down a similar path towards sin because of your example (Romans 14:13-22).

​ Living together before marriage doesn't reflect the commitment that God instituted and ordained.  The good news is that it is never too late to make a change.  God forgives sin.  That's what He's all about.  He wants to have a relationship with us, and no situation or sin is too great for Him to forgive.  If we want His forgiveness, we must stop committing the sinful act (1 John 3:6 - No one who abides in Him keeps on sinning; no one who keeps on sinning has either seen Him or known Him) and ask God for forgiveness.  He will be faithful to forgive us (1 John 1:9 - If we confess our sins, He is faithful and just to forgive us our sins and to cleanse us from all unrighteousness).

​ The divine institution of marriage suggests a covenant among the man, the woman, and God.  The martial relationship is more important than any other relationship except one's relationship with God.  It is modeled after God's relationship with His people, the Church.  Jesus is the bride-groom, and the Church is His bride.  The unique, committed setting of marriage is also the place God designed for the expression of sex.  In 1 Corinthians 6:15-18 (Do you not know that your bodies are members of Christ?  Shall I then take the members of Christ and make them members of a prostitute?  Never!  Or do you not know that he who is joined to a prostitute becomes one body with her?  For, as it is written, "The two will become one flesh."  But he who is joined to the Lord becomes one spirit with him.  Flee from sexual immorality.  Every other sin a person commits is outside the body, but the sexually immoral person sins against his own body), Paul discusses the sinfulness of all sexual relations outside of marriage.  In addition to outward sinfulness, sexual sin is a sin against one's own body.  This makes sexual sin uniquely destructive, a clear reason to follow God's plan for sex.

​The truth is, you can't "practice" marriage.  Marriage is a permanent commitment.  And you'll never know what the other person will do if you get cancer or lose your job until it happens years (perhaps even decades) down the road.  That's part of the risk--part of the adventure.  That's why part of the marriage vow says. "for better or for worse, in sickness and in health."

Statistics prove that cohabitation is not a healthy way for a relationship to progress; in fact, cohabitation can decrease your chances of getting married and couples who do marry after cohabitating are more likely to divorce.  However, we should be concerned with more than mere statistics.  We need to remember that, as God's children, we're called to different standards.  We're called to be set apart--to be in but not of the world.​ 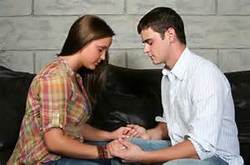 Dear Heavenly Father, we thank You for your tremendous gift of the Sacrament of Marriage.  Enable us to grow in our intimacy with You and with each other.  Teach us the beauty of forgiveness so we may become more and more one in heart, mind and body.  Strengthen our communication with each other, and help us become living signs of your Love.  Help us to be examples of commitment, Love, and service to our families and children.  Make us a sign of the unity which Jesus prays for at the Last Supper.  We open ourselves to the guidance of your Holy Spirit, who empowers us to love in Jesus name and walk in His footsteps.  Amen

Mae and Chuck began mentoring in home Bible studies and saw how their Christ-centered relationship was "different" from others.  Though far from "perfect," their marriage and commitment to Christ demonstrated a peace and happiness that intrigued other couples.  This became the opportunity to mentor other couples and to teach them to work at their relationship and grow their love for one another (with Christ) each day.